The National Clubs Finals were split between Golden Lane in the Barbican and Syston Social Club on July 12th 2009. I am grateful to Brian Smith and David Sedgwick for taking care of the events in London whilst Cyril Johnson controlled the matches at Syston for me.
The Golden Lane Community Centre hosted 4 matches. The final match of the Open, which would determine the prizes saw Wood Green retain their title by 4-2 with wins by John Emms and Richard Pert with draws by Nick Pert, Chris Ward, Neil MacDonald and Desmond Tan, a remarkable achievement in not losing a match against a strong Mushrooms for whom Ian Snape, Ron Harris, Bill Linton and David Wilson drew, all against higher rated opponents.
The Major final saw another victory without losing a game by Wanstead and Woodford 4-1 against St Albans. Ian Hunnable, Larry Marden and Philip Staniland all won with draws by Ian Reynolds and David Spearman. St Albans fought valiantly but draws by Jacek Winter and Jeremy Fraser-Mitchell were not enough.
Snodland followed their win of the Small Club of the Year with a close win by 2½ – 1½ against Hackney. Wins for the men of Kent by Matthew Bunn and Chris Marshall with a draw by David Nicholls overcame a spirited defence of their title by Hackney for whom Mark Rivlin won and Dashiell Shaw drew.
The U100 Plate between Forest of Dean and Thurrock was won by the men of Essex 3½ – ½ with wins by Andrew Offord,
Robin Smith and Ron Prickett with a draw by Mike Bradford whose draw with Raymond Francis was scant consolation for the Foresters
An excellent set of matches, in a good venue well organised by Brian Smith and controlled by David Sedgwick, to whom my grateful thanks 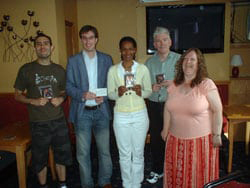 At Syston, the three matches were all interesting. The U100 Championship match between Hackney and Bushbury was decided after an hours with wins by the London team on Boards 1 and 3. A further win on board 4 meant that the final win by Bushbury was a consolation, yet all fours were very close games. Mr A Schroeder, the Bushbury top board put in a remarkable performance, the oldest player in this event for many years at the age of 94.
For a long time, Cyril thought we might have a replay in the Minor Plate final between Bedford and Newark, especially as the bottom boards were drawn and the other games also looked drawish. Eventually Bedford won the top board and the match, but Newark ensured that the match was decided on board count by winning board 2.
The Major Plate final went right down to the wire. An early draw on board 4 in a double edged position was followed by a win on time for Wood Green on board 5, followed by another in for the London holders on board 3. Bushbury won an exciting game on top board, leaving it all down to a very open game on board 2, with the arbiter keeping score in anticipation of a 10.2 claim. Bushbury’s board 2, whilst being very short of time, ignored a draw by repetition which would have cost the match and then won his opponent’s queen. The power of two passed pawns on the 6th coupled with mutual time shortage caused a flurry of moves and an agreement of a draw, which meant that Wood Green retained their title by 3-2

Once again the finals were split between London & the Midlands, with Brian Smith organising venue & refreshments at Golden Lane Community Centre in London, and Syston & District Social Club organised by the Chief Controller.

Wanstead & Woodford retained the Major Championship, but not without a valiant fight from Maidstone. It appeared early on as if Wanstead were cruising to victory as their team was stronger than Maidstone on 4 of the 5 boards. But a win on board 3 by Maidstone suddenly turned the tide, if Maidstone could win on board 2 they would win the match on board count. Maidstone started to get a slight positional edge, but Oliver Gill ran very short on time and had to settle for a draw – giving the match win to Wanstead.The Major Plate saw Metropolitan overcome fellow London Leaguers Athenaeum, without losing a game. This feat was emulated by Bedford, who denied Snodland a second successive winning trip to the capital in the Intermediate Championship.The Intermediate Plate was in contrast a much closer affair, only settled in favour of Hackney on board count. The Hackney win was remarkable because their average grading of 118 was significantly lower than the 144 of opponents Bushbury. But for the grading of the Hackney top board, the team would have been eligible for the Minor section.

The Minor Championship final has been a cause of much consternation, with Chipping Campden only able to raise 3 players from their small club, too many players having booked their holidays – perhaps lacking confidence in the team reaching the finals? Already down a board from the start, the Cotswold side could only muster a draw, leaving Hastings & St Leonard’s comfortable winners. As the current rules fail to address this situation, there is currently much deliberation over rule amendments to clarify matters for next season.

Forest of Dean out-graded their opponents in the Minor plate, but were quickly a board down to Bushbury when their board 3 overlooked the fact that Queen could be pinned to King. They failed to recover from this early shock, with Bushbury winning 3-1 without losing a board & thus gaining compensation for their narrow loss in the Intermediate.

My thanks to Brian Smith for organizing the Southern venue; and to Cyril Johnson for acting as arbiter and assistant sandwich maker. Thanks are also due to Guy Greenland & Mike McNaughton as section controllers in the Intermediate & Minor sections respectively.

The finals have now been played!
Click here to see Adam Raoof’s photographs from the event

Major Plate (as all preliminary or first-round losers wish to enter the Plate, a Preliminary Round is needed to get down to 8 teams)

OPEN
The Open has the same make up as last season – Mushrooms, Maidstone & Wood Green

This year’s winner in the National Club Championship – Minor Section is being decided by a mini league system in two pools, with the top team in each pool contesting the Final.
Pool A – Bishops Stortford | Hackney | Forest of Dean
Pool B – Fenton | Bushbury | Syston

CONTROLLER’S NOTE
The winners of these first round fixtures will progress to the Championship. However it will be necessary to have a preliminary round to bring the numbers in the championship to four. The losers will progress to the Plate unless they indicate they do not wish to compete, and again two preliminary rounds will be required to bring the number down to four. These pairings will be done after the conclusion of round One.

Minor
Six teams entered. Pools A & B were set up with three teams in each. Under an all-play-all system the best team in each Pool became a finalist. The results are summarised as follows:

Intermediate – Championship: Redditch
Plate: Kenilworth
Round 1 | Round 2 | Round 3 | Round 4 | League Table